The Aeolian Islands, also known as Lipari Islands, are the perfect holiday destinations for those who want to enjoy a different fun experience. Despite the fact they share the same volcanic origins, each of them is different from the others, and visit them with an Aeolian Islands boat tour in a day (with departure even from Messina), could be the right option if you don’t have enough time but you want to feel their typically Mediterranean atmosphere.

The tour Lipari Vulcano is an Aeolian Islands boat tour where you will discover the two closest islands to the Sicilian coast: Lipari, the largest one that administrates the others except Salina, and Vulcano, with its black sands.

Here the 5 reasons why you will never regret getting an Aeolian Tour by day cruise to Lipari & Vulcano:

1. Island of Lipari: the impressive volcanic natural landscape. In 2000, the Aeolian Islands have been included into the UNESCO World Heritage List for their particular geological features and they are even today object of study for their volcanic activity. With the Aeolian Islands boat tour the arrival to areas of volcanic origins will give you the possibility of admiring closely the rocky formations of the archipelago: the mythological scenery of the majestic Cliffs of Lipari, the volcanic debris morphology, the huge rocks above the sea, the Pumice Quarry white and the black obsidian, the unreachable beaches and the clear waters.

2. Things to do in Lipari: the Archaeological Museum of the Castle. One of the things to see in Lipari during the Aeolian Islands boat tour is the Castle, which hosts inside the Archaeological Museum, showing the processes leading to the development of the Aeolian culture from the Pre-history. The museum is divided into different sections, among whom a volcanic section, illustrating the geological history of the archipelago, and a submarine section, with evidele calttnces of about 15 wrecks, sunk in the most dangerous points of the Aeolian Islands.

3. Lipari tour: the most beautiful beaches and the Belvedere Quattrocchi. The most popular beach of the island of Lipari is Canneto Beach, in a village created to host the families of the Pumice Quarry workers, with a long pebble shore. Among the most beautiful and suggestive beaches of Campo Bianco, named after the presence of the colour of the Pumice Quarry, the Acquacalda bay with a view on the island of Salina and the wonderful beach of Valle Muria. Other coves can be reached by one of the Lipari boat trips, available on the island. Another of the things to do in Lipari is a visit to the Belvedere Quattrocchi, a panoramic point appreciated by photographers, where to enjoy a stunning view on the close Vulcano Island.

4. Tour Lipari vulcano: the open-air bath. Among the Lipari Islands Vulcano is the closest to the Sicilian coast and the easiest to arrive to. Do not be intimidated by the strong smell of sulphur from the near pool of sulphur mud, resulting from the volcanic activity still present on the island. The Island have never been permanently inhabited by the ancient Aeolians, who used to arrive to the island to take advantage from the sulphur mud pool and the warm waters, due to the fumaroles. Even today the island is a tourist destination for those who want to experience the sulphur mud pool and to enjoy the relax on the Black Sand Beach.

5. Lipari tour and Vulcano: the sunset from the Great Crater. The climb to the top of Vulcano, of about 1 hour, is quite easy but we suggest anyway the use of the right clothes and equipment. This Aeolian Islands boat tour gives the possibility of walking on the edge of the Crater, where anyway there are still the fumaroles and where the smell of the sulphur is strong. The colour of the soil changes according to its composition and it has different yellow and ochre shades. The climbing on to the Great Crater is suggested during the early morning, but it gives the best experience at the sunset, where with a single glance you can stare at the Seven Sisters and at the Sicilian coast, with a fire sky as background colour.

OurVulcano and Lipari tour from Messina

The Tour Lipari Vulcano by daily cruise is our Aeolian Islands boat tour available even with departure from Messina with transfer service every day from June to August except on Monday.  One of our Discover Messina assistant will be at your service during all this Aeolian Islands boat tour, showing you the best things to do in Lipari and the most interesting points of Vulcano Island.

Sicilian holidays: 7 reasons why you need a trip to Sicily
June 15, 2021Sara 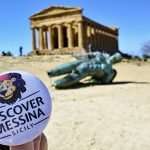