Messina Sicily can count thousands of visitors from Italy and abroad every year, also because cruise ships dock in the port during the high season, but despite this, the city is sometimes a “skipped” destination in favor of other Sicilian tourist attractions, with Taormina and Mount Etna on the top of the list. We offer a selection of things to do in Messina Sicily as well as Messina tours to invite you to spend an holiday in Messina Sicily: maybe one day is not enough to discover the complete heritage of this city, whose history is very ancient and full of legendary episodes, but we are sure that it will be a fantastic experience.

If you would like to combine the natural landscapes to the cultural heritage, you can enjoy the best Messina attractions during a day tour spent in the City center and coast in which you can appreciate the local lifestyle of fishermen dedicated to the swordfishing for centuries and centuries. The swordfishing activity has been very popular in the Strait of Messina since the Greek colonization, and nowadays it is still organized using the expert fishing techniques introduced by the Arabs, through a wooden boat named feluca: to see a feluca in action is not everyday matter, unless you were born in Messina Sicily.

This magic place, crossed for many centuries by several populations and dominators, kings and mariners, is the perfect location to set ancient myths and legends of the Strait of Messina. The most known myth set in the Strait of Messina is about the syrens Scylla and Charybdis, the two marine monsters that attacked vessels that crossed the sea channel between Sicily and Calabria. The myths of the syrens Scylla and Charybdis say that they continue to live as guardians of the Strait of Messina: Scylla lives in the coastline of Calabria, on the other side of the Strait, instead Charybdis lives in Capo Peloro, the very northeastern limit of the island. Modern interpretations of this myth identify the syrens Scylla and Charybdis as the whirlpools produced in the Strait of Messina because of the cross currents: this is why vessels in the past didn’t reach to cross the channel, drawn inside the massive vortexes. Their myth, still alive in Sicilian culture, inspired also the Florentine sculptor Giovan Angelo Montorsoli in the 16th century for his work of art, the Fountain of Neptune, that is kept original in the Regional Museum of Messina, instead a copy, made in the 19th century, stands in the city center, in front of the Marina.

The Regional Museum of Messina

You can enrich your holiday in Messina Sicily with a tour to the Regional Museum of Messina. Here you would have the chance to live the history of the city step by step, starting from the archaeological collection with Greek and Roman testimonies recovered through excavations in the city center, especially near the area of the Port that has been always inhabited since ancient times. Our professional tour guide will lead you to discover the medieval section, with precious and gorgeous works of art like byzantine mosaics, Arabic inscriptions, paintings on wood, especially those by Antonello da Messina and his school, produced since the second half of the 15th century. An important section is dedicated to the sculpture, celebrating Antonello Gagini and Giovan Angelo Montorsoli, both artists active in Messina in the 16th century.

The crown jewel of the Regional Museum of Messina is the room dedicated to Caravaggio, with his two masterpieces The Rising of Lazzaro and Adoration of the Shepherds of the beginnings of the 1600s, characterized by the technique of chiaroscuro. The tour continues upstairs visiting sections referred to the 18th-19th centuries, with a collection of silverware, produced by the silversmiths from Messina. Another precious item is the Carriage of the Senate, built in golden sculpted wood, symbol of the splendor of the Jurors of the past.

Among the things to do in Messina Sicily, after visiting the Regional Museum of Messina, other unmissable Messina attractions are the panoramic view from the balcony of Cristo Re, overlooking the Strait of Messina and the Port, and the show of the astronomical clock of the Cathedral of Messina, that happens just once a day at midday, with golden-bronze statues moving thanks to a complex mechanism invented in 1930s by the Ungerer brothers from Strasbourg. This is a must-see event, a very emotional experience during all Messina shore excursions or Messina tours, as well as the amazing decorations of the interior of the Cathedral of Messina and the enchanting architecture of the Church of Catalans, provided during the Norman kingdom.

Messina tours by Discover Messina Sicily generally include a tasting of typical Sicilian sweets, like ice-cream and cannoli, to make your stay in Sicily a unique and incomparable experience. Don’t forget to take with you a camera to fix all the incredible views of the blue sky and the blue sea and the Messina attractions you have visited during your time in Sicily. 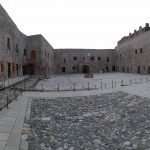