Moorish architecture is an architectural style that blended influences from the many reign and cultures that developed and flourished in the western Islamic world. And while some examples are visible in Southern Italy, Sicily was part of the Islamic empire for almost a century and thus, the Moorish architecture has been one of the landscape characteristics for centuries.

Moorish architecture started spreading all through Sicily after the Islamic empire conquered the island in 902 AC. The Moors, as the Muslims that inhabited the Iberian Peninsula and Sicily were called, reigned in Europe for over 200 years. Under Moors domination Sicily prospered as the Muslim culture brought economic, technical and social progress. Math flourished as well as poetry, astronomy, medicine and art. The main changes, though, were made in agriculture. They tilled the land and introduced new cultures, cottons, jasmine and even pistachio, changing forever the landscape of the island. Even though architectural remains of that period are very few, Moorish architecture, style, art and culture permeated Sicily to the point that their traces lived through the other many populations that dominated the island afterward and their influences are still evident today in language, traditions, art and architecture. So, when Normans finally arrived in Sicily in 1061, what they found was an already strong and well-established culture and, instead of suppressing it, they made it flourish and prosper in harmony with their own and the one they brought from the Eastern Roman Empire, known as Byzantine. Under Norman domination, Sicily finally entered that period of syncretistic growth that made it what it is today.

Monreale Cathedral is the perfect example of this religious syncretism and cultural fusion. Built in 1174, the legend says Guglielmo II The Good, fallen asleep under a carob tree, dreamt of the Virgin Mary revealing that right under his feet was hidden a treasure that was to be used to build a new church dedicated to her. And so he did, he called the best artists and artisans from the eastern and western world: Arabs, Persians, Ligurians, Venetians, Provençals and Campanians all joined their knowledge and artistical skills to create the perfect balance between Byzantine, Norman and Moorish architecture. The Cathedral has been, through the centuries, modified several times up to the sublime ensemble of different styles and cultures that we know today, so unique that in 2015 it has been declared World Heritage Site by UNESCO along with Cefalù cathedral, Palermo cathedral and the Palatine Chapel of the Norman Palace.

The frontal façade is framed by what rests of two imposing Norman bell towers; the external walls are decorated with geometric patterns along with the entrance that presents a delicate design of a blind pointed arcade with an unmistakable Arabic influence. The same motive can be found with an even stronger Arabic taste in the apsidal zone. The principal nave is separated by the two lateral aisles with two rows of nine columns, above them Romanesque capitals, probably coming from northern Africa, and pointed arches typical of Moorish architecture. But what is most stunning about Monreale Cathedral, is the sheer amount of glass mosaics, they make up most part of the cathedral’s walls and the surface they cover counts up to 6400 meters square. The golden mosaics represent biblical stories from the old and new testament. In the central nave are displayed scenes from the creation and earthly paradise cycles, from the genesis of earth and sky to the murder of Abel, whilst the transept presents scenes of Jesus life in the center and scenes of the Ascension and Pentecost in the lateral sides. At the end of the naves, a superb Christ Pantocrator takes up all the apse, inevitably capturing the watcher’s eye. Apart from the polished mosaics, Monreale Cathedral enshrines another treasure. The altar is a masterpiece of baroque style built in 1771 and in the five bronze and silver medallions are portrayed episodes of the life of the Virgin Mary.

Another part of Monreale Cathedral where Moorish architecture is exceptionally outstanding is the monastery’s cloister. A Romanesque style dominates the structure, but the Moorish influence is intense. Again, the confluence of styles gives us a sense of beauty and elegance with a pinch of exotic taste that is unmistakable. Innumerable columns are decorated in Arabic style carved in elaborate patterns and adorned with shiny paint while the carved capitals tell stories of biblical origin. In ancient times the center of the cloister contained five fountains, but today only one survived. It is encapsuled inside a smaller cloister and is composed of a column shaped as the trunk of a palm, water spills out of the carved capital forming the leaves. In the cloister, art, architecture, sculpture and painting contribute to the indivisible incoherence of a masterpiece born with a unified vision. Monreale cathedral is a reality that makes its visitors fall in love, regardless of their believes.

Cefalù cathedral is another representation of Moorish architecture in Sicily that reflects the complexity of an architectural tradition deeply influenced by very different techniques and motives and is the perfect example of the religious syncretism that characterized Sicily in that period. A legend says Ruggiero II was on a ship to Palermo when a terrible storm occurred, almost wrecking the ship. At this moment of need, Ruggiero II turned to God and promised to build a cathedral wherever the ship would have landed, and right when the storm had ceased, the small city of Cefalù appeared before his eyes. The king did as he promised and in 1131 he started building a church so big and imposing that it still stands out today. Although this story is touching and interesting, it is evident how the church is more a symbol of royal power then a representation of the king’s gratefulness to God. With the two bell towers acting as watchtowers and the use of merls on the sides, the whole structure is built like a castle and dominates the landscape in the small town of Cefalù.

Very similar to Monreale Cathedral, the construction has a Latin cross plan, the central nave is divided in two aisles by eight columns. The two bell towers are in Norman style while the pointed arches in the upper part of the entrance façade and the three apses have clear Arabic influences. The inside too shines with thousands of golden little glass tiles, but differently from Monreale cathedral, the figures displayed don’t tell any story and only represent the Christian hierarchy of saints. What catches the eye most is again the Christ Pantocrator in the central apse. Above it is the paradise, represented by four cherubs and four seraphs that watch over the crowd with countless eyes. Right outside the church, a cloister that was used as a model for the way more famous one in Monreale cathedral. Even though the cloister is no longer whole, the remains are enough to let us appreciate the elegance and sobriety of its Moorish architecture style. The capitals have different decorations, from Genesis stories, to plants and animals, monsters and contortionists. Cefalù Cathedral, built a few decades before, was used as a model for the construction of Monreale Cathedral.

Sicily is a land full of history and beauty, the variety and number of places to visit is unbelievable and if you’re wondering what to see near Palermo, well, this article says it all. Cefalù and Monreale are milestones in Sicilian and Italian history and whether you’re interested in a tour of World Heritage Sites in Sicily, a tour of South-West Sicily or a trip to Palermo and nearby cities, if you’re trying to be overwhelmed by beauty, be sure not to miss any of these cathedrals when deciding what to see near Palermo, because you will not be disappointed. Cefalù and Monreale Cathedrals have that kind of uniqueness that instead of leaving visitors satiated, leaves them hungry for more. 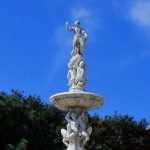 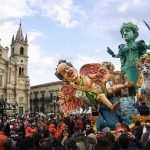 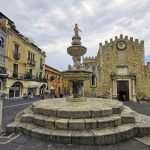